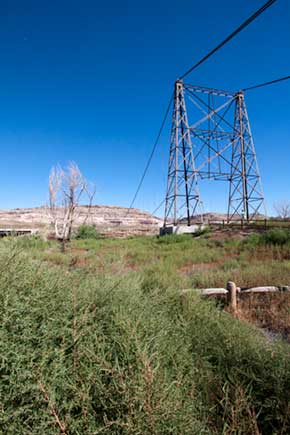 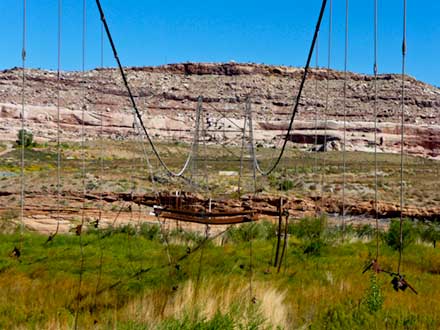 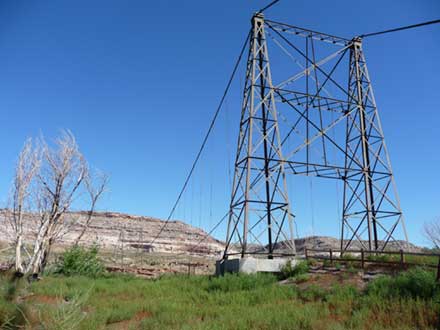 After our visit to Island in the Sky, we spent the night in Moab, Utah. The next morning we head to our next stop, Grand Lake, Colorado-- the headwater of the Colorado River. We elected to take Utah Rte. 128--the Upper Colorado River Scenic Byway instead of the faster and boring interstate.

Our first stop was to see the remains of the Dewey Bridge over the Colorado River. When it was built in 1916, the Dewey Bridge was the connection between Moab, Utah and the rest of the world. It opened the Moab region to easy trade with western Colorado. The bridge was the longest suspension bridge in Utah. It at the time it was built, it was the longest suspension bridge west of the Mississippi-- was longest was the Cameron Suspension Bridge across the Little Colorado River at Cameron, Arizona.

The bridge with its wooden roadbed and one lane for traffic was inadequate for modern traffic loads. This led the Utah Department of Transportation to replace the bridge in 1988 and clos it to auto traffic. The bridge was still used by bikers and hikers.

The bridge was burned in April, 2008 when a kid playing with matches started a brush fire that destroyed the bridge. The wooden road bed was totally destroyed by the fire. When we were there in September 2010, there was a sign asking for donations to maintain what was left of the bridge. It's so sad that an important piece of our history was destroyed by a careless act.

You can read about the history of the bridge and fund raising efforts at the Grand County Dewey Bridge site. The Wikipedia article is quite good Dewey Bridge. I doubt that it will every be restored.