You are here Travels with Nessie Exploring North CarolinaOuter Banks 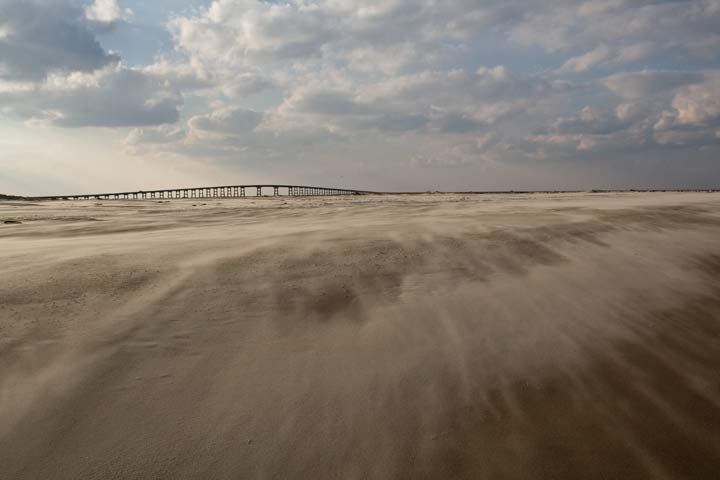 In January 2008 we made a short trip to the NC Outer Banks. We left Nessie home because we planned to spend some time at Lake Mattamuskeet which is closed to paddling during the winter. So Nessie and our mini van stayed home and we traveled in our Celica.

The trip included a short stop at the Alligator River Wildlife Refuge.

The Alligator River Wildlife Refuge is interesting because it is the location of the red wolf restoration experiment. The red wolf was once found throughout the southeastern United States, from the Atlantic coast to central Texas and from the Gulf Coast to central Missouri and southern Illinois. Between the period of 1900 to 1920, red wolves were eliminated from most of the eastern portion of their range. A small number persisted in the wild in southeastern Texas and southwestern Louisiana until the late 1970s. By 1980, the species was determined to be extinct in the wild. A small number of wolves was captured and a captive breeding program started. One captive population of red wolves is in the Museum of Life and Science in Durham, NC.

The North Carolina Wildlife Resources Commission has requested that US Federal Government end the Red Wolf recovery program and capture the remaining wild red wolves and return them to captivity. The federal goverment has taken the NC request under consideration and is expected to make a decision sometime in the future. I think that it would be a shame to end the efforts to keep the red wolf as a wild animal.

We were interested in the paddling possibilities in the Buffalo

City area. A friend had highly recommended the paddling there and we were anxious the check it out. The Buffalo City boat launch site is a short drive down a dirt road called Buffalo City Road off of US 64 about 20 miles west of Manteo, NC. We took the road and walked around the area. There is a short nature trail at the boat ramp. There are several marked paddling trails that all look interesting. 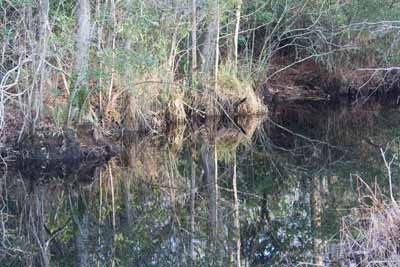 The main problem we noticed was some trees had fallen across part of the paddling trail. It looked like there was still space to get around them. Some of the passages were narrow, but more than wide enough for a kayak. The paddling looked interesting enough that we added this to our planned trips. Looks like this should be a nice fall/winter or spring trip.

Buffalo City was a timber boom town and is now a ghost town. It's interesting that something other than gold and silver causes ghost towns.

We stayed in Kill Devil Hills because my wife found a great rate at the Quality Inn Motel. We had a great room on the beach. Pretty much had the place to ourselves. Kill Devil Hills is the site of the Wright Brothers Memorial which we did not visit on this trip. Too much else to see.

The weather was great for a walk on the beach the first day. 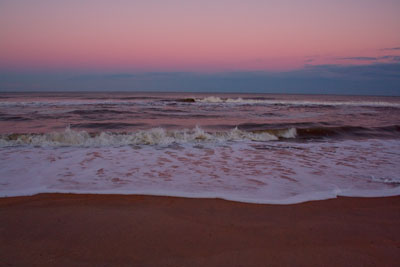 There was little wind and the temperature was comfortable with a light jacket. We took advantage of the weather and took a nice stroll up and down the beach. There was a little surf. We had to share the beach with the a few gulls looking for a midnight snack. I'm not sure they were having much luck. No one else was around. This is a great time to visit the NC beach. 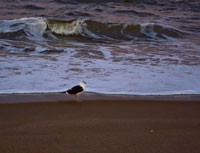 The only bad part about visiting the beach in the winter is that many of the restruants are closed. So the dining choices are limited.

Of course you have to pick your days carefully to avoid really bad weather. A friend from Australia got snowed in at Kill Devil Hills several years ago. They were predicting snow for Durham, but we assured him that it never snows at the beach. The storm track changed and dumped several inches of snow on the Outer Banks.

The wind picked up for the rest of our trip. It was also cooler--not really cold but long strolls on the beach were out. The wind made conditions rough enough that we were glad that we had not planned paddling on this trip. The wind did not interfere with out plans to visit Pea Island, Jockey's Ridge , and Lake Mattamuskeet.

Additional pictures are in our photo gallery.